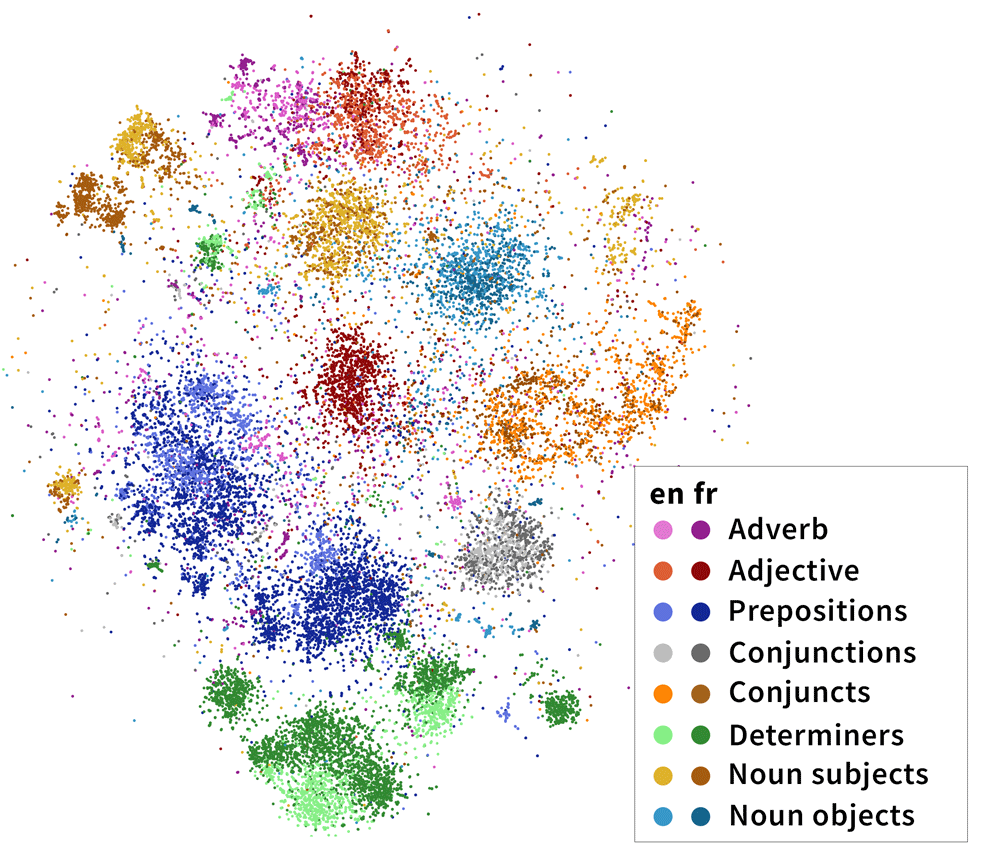 If you ask a deep neural network to read a large number of languages, does it share what it’s learned about sentence structure between different languages?

Deep neural language models like BERT have recently demonstrated a fascinating level of understanding of human language. Multilingual versions of these models, like Multilingual BERT (mBERT), are able to understand a large number of languages simultaneously. To what extent do these models share what they’ve learned between languages?

Focusing on the syntax, or grammatical structure, of these languages, we show that Multilingual BERT is able to learn a general syntactic structure applicable to a variety of natural languages. Additionally, we find evidence that mBERT learns cross-lingual syntactic categories like "subject" and “adverb”—categories that largely agree with traditional linguistic concepts of syntax! Our results imply that simply by reading a large amount of text, mBERT is able to represent syntax—something fundamental to understanding language—in a way that seems to apply across many of the languages it comprehends.

Our results are presented in the forthcoming ACL 2020 paper, Finding Universal Grammatical Relations in Multilingual BERT. This post draws from the paper, which is joint work with John Hewitt and Chris Manning. You can also find the code here.

If you’d like to skip the background and jump to the discussion of our methods, go here. Otherwise, read on!

Past childhood, humans usually learn a language by comparison to one we already speak.[1] We naturally draw parallels between sentences with similar meanings—for example, after learning some French, one can work out that Je vis le chat mignon is essentially a word-for-word translation of I see the cute cat. Importantly, humans draw parallels in syntax, or the way words are organized to form meaning; bilinguals know that mignon is an adjective which describes the noun chat, just as cute describes the noun cat—even though the words are in the opposite order between languages.

Surprisingly, this trial by fire works! A network trained this way, like Google’s Multilingual BERT, is able to understand a vast number of languages beyond what any human can handle, even a typologically divergent set ranging from English to Hindi to Indonesian.

This raises an interesting question: how do these networks understand multiple languages at the same time? Do they learn each language separately, or do they draw parallels between the way syntax works in different languages?

Knowing what it means to "know"

First, let’s ask: what does it even mean for a neural network to "understand" a linguistic property?

One way to evaluate this is through the network’s performance on a downstream task, such as a standard leaderboard like the GLUE (General Language Understanding Evaluation) benchmark. By this metric, large models like BERT do pretty well! However, although high performance numbers suggest in some sense that the model understands some aspects of language generally speaking, they conflate the evaluation of many different aspects of language, and it’s difficult to test specific hypotheses about the individual properties of our model.

Instead, we use a method known as probing. The central idea is as follows: we feed linguistic data for which we know the property we’re interested in exploring (e.g. part-of-speech) through the network we want to probe. Instead of looking at the predictions of the model themselves, for each sentence we feed through, we save the hidden representations, which one can think of as the model’s internal data structures. We then train a probe—a secondary model—to recover the target property from these representations, akin to how a neuroscientist might read out emotions from a MRI scan of your brain.

Probes are usually designed to be simple, to test what the neural network makes easily accessible. intuitively, the harder we try to tease a linguistic property out of the representations, the less the representations themselves matter to your final results. As an example, we might be able to build an extremely complex model to predict whether someone is seeing a cat, based on the raw data coming from the retina; however, this doesn’t mean that the retina itself intrinsically "understands" what a cat is.[2]

A Tale of Syntax and Subspaces

So what form, exactly, do these hidden representations take? The innards of a neural network like BERT represent each sentence as a series of real-valued vectors (in real life, these are 768-dimensional, but we’ve represented them as three-dimensional here):

A probe, then, is a model that maps from a word vector to some linguistic property of interest. For something like part of speech, this might take the form of a 1-layer neural classifier which predicts a category (like noun or verb).

But how do we evaluate whether a neural network knows something as nebulous as syntax, the way words and phrases are arranged to create meaning? Linguists believe sentences are implicitly organized into syntax trees, which we generate mentally in order to produce a sentence. Here’s an example of what that looks like: 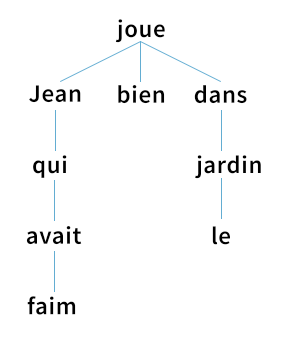 To probe whether BERT encodes a syntax tree internally, we apply the structural probe method [Hewitt and Manning, 2019]. This finds a linear transformation[3] such that the tree constructed by connecting each word to the word closest to it approximates a linguist’s idea of what the parse tree should look like. This ends up looking like this: 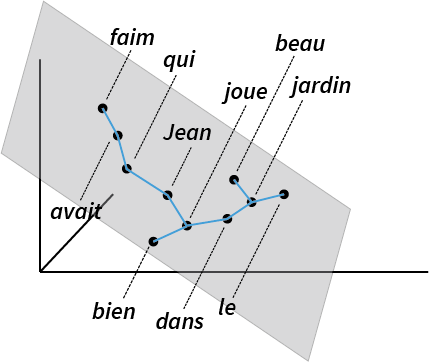 Intuitively, we can think of BERT vectors as lying in a 768-dimensional space; the structural probe tries to find a linear subspace of the BERT space which best recovers syntax trees.

Does this work, you might ask? Well, this certainly seems to be the case: 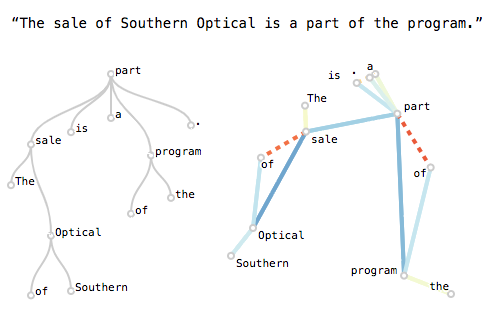 Hewitt and Manning apply this method only to monolingual English BERT; we apply their method to 10 other languages, finding that mBERT encodes syntax to various degrees in all of them. Here’s a table of performance (measured in UUAS, or unlabeled undirected accuracy score) as graphed against the rank of the probe’s linear transformation: 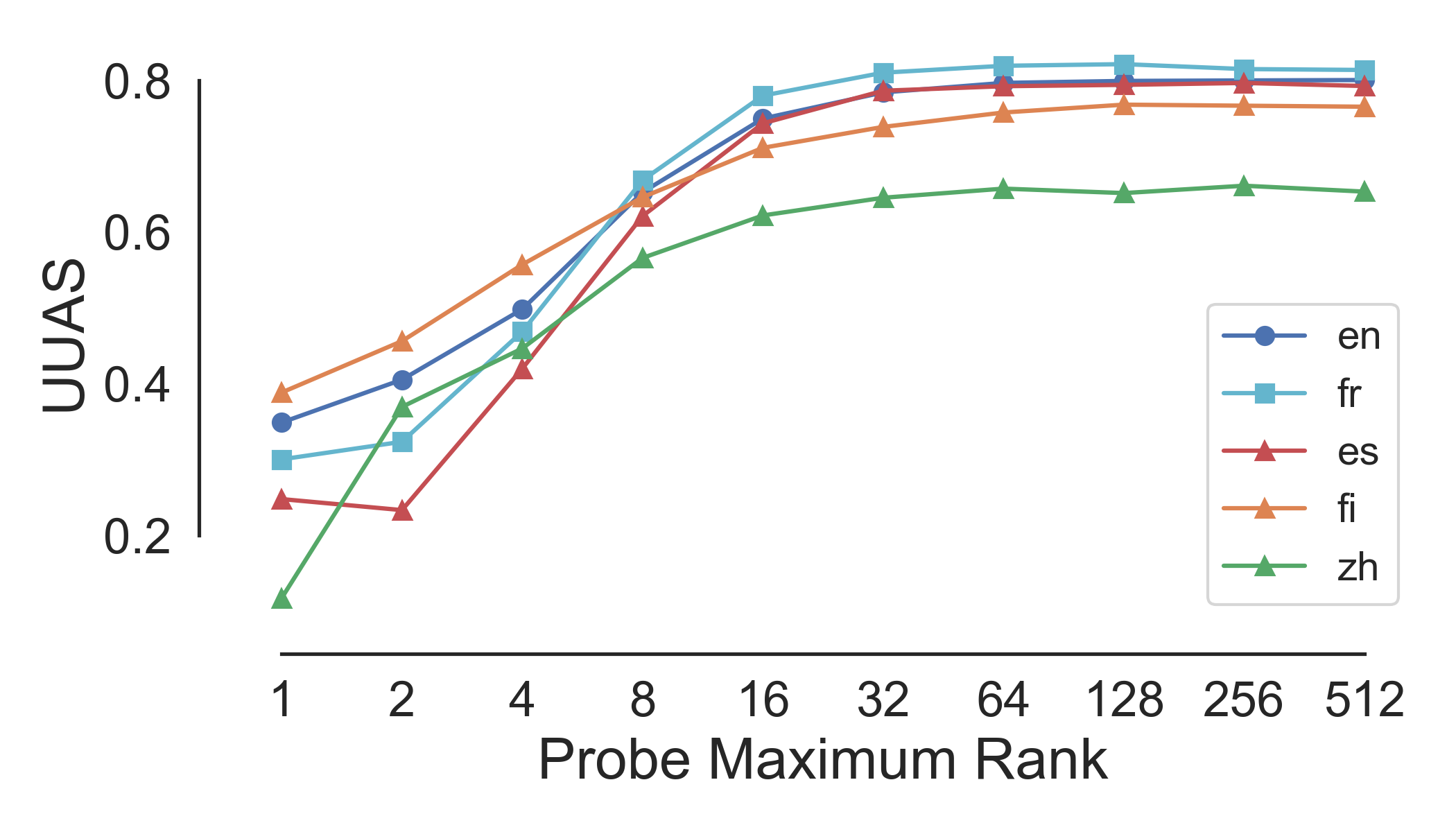 With this in mind, we can turn to the question with which we started this blog post:

To answer this, we train a structural probe to predict syntax from representations in one language—say, English—and evaluate it on another, like French. If a probe trained on mBERT’s English representations performs well when evaluated on French data, this intuitively suggests that the way mBERT encodes English syntax is similar to the way it encodes French syntax.

Does this work? In a word, basically:

Out of the 11 languages that we evaluate on, we find that probes trained on representations from one language are able to successfully recover syntax trees—to varying degrees—in data from another language. Evaluated on two numerical metrics of parse tree accuracy, applying probes cross-lingually performs surprisingly well! This performance suggests that syntax is encoded similarly in mBERT representations across many different languages.

We’ve shown that cross-lingual syntax exists—can we visualize it?

Recall that the structural probe works by finding a linear subspace optimized to encode syntax trees. Intuitively, this syntactic subspace might focus on syntactic aspects of mBERT’s representations. Can we visualize words in this subspace and get a first-hand view of how mBERT represents syntax?

One idea is to focus on the edges of our syntactic tree, or head-dependent pairs. For example, below, was is the head of the dependent chef: 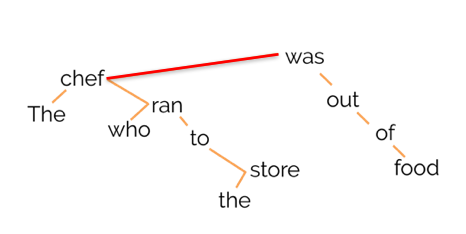 We do this for every head-dependent pair in every sentence in our corpus, then visualize the resulting 32-dimensional vectors in two dimensions using t-SNE, a dimensionality reduction algorithm. The results are striking: the dependencies naturally separate into clusters, whose identities largely overlap with the categories that linguists believe are fundamental to language! In the image below, we’ve highlighted the clusters with dependency labels from Universal Dependencies, like amod (adjective modifying a noun) and conj (two clauses joined by a coordinating conjunction like and, or): 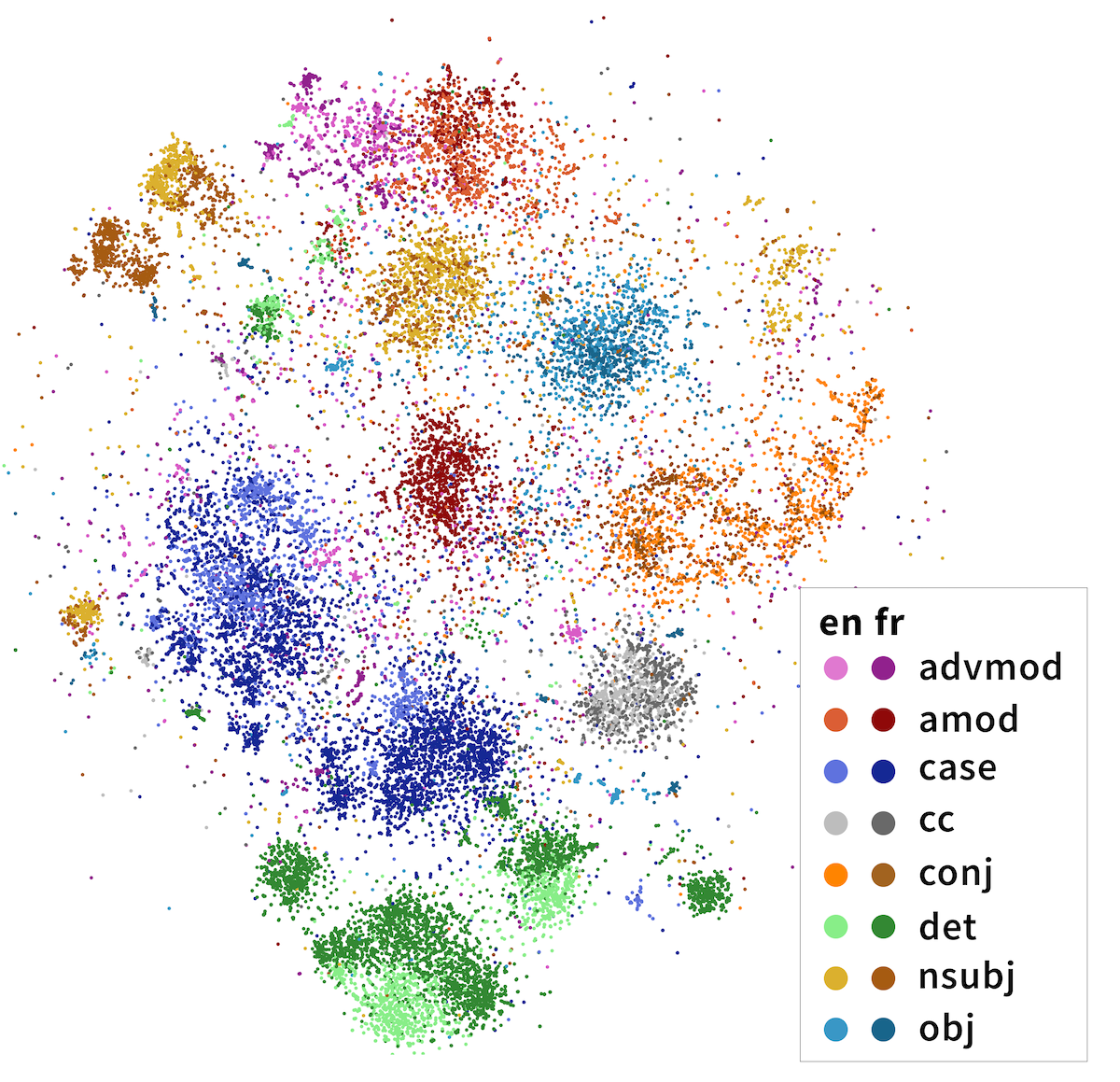 Importantly, these categories are multilingual. In the above diagram, we’ve projected head-dependent pairs from both English (light colors) and French (dark colors) into a syntactic space trained on solely English mBERT representations. We see that French head-dependent vectors cluster as well, and that dependencies with the same label in both English and French share the same cluster.

Training a probe successfully demonstrates that we can map from mBERT’s representations to a standard set of dependency category labels. But because our probe needs supervision on a labeled dataset, we’re limited to demonstrating the existence of a mapping to human-generated labels. In other words, probes make it difficult to gain insight into the categories drawn by mBERT itself.

By contrast, the structural probe never receives information about what humans think dependency label categories should look like. Because we only ever pass in head-dependent pairs, rather than the category labels associated with these pairs, our method is free from human category labels. Instead, the clusters that emerge from the data are a view into mBERT’s innate dependency label representations.[4]

Taking a closer look, what can we discover about how mBERT categorizes head-dependency relations, as compared to human labels? Our results show that mBERT draws slightly different distinctions from Universal Dependencies. Some are linguistically valid distinctions not distinguished by the UD standards, while others are more influenced by word order, separating relations that most linguists would group together. Here’s a brief overview: 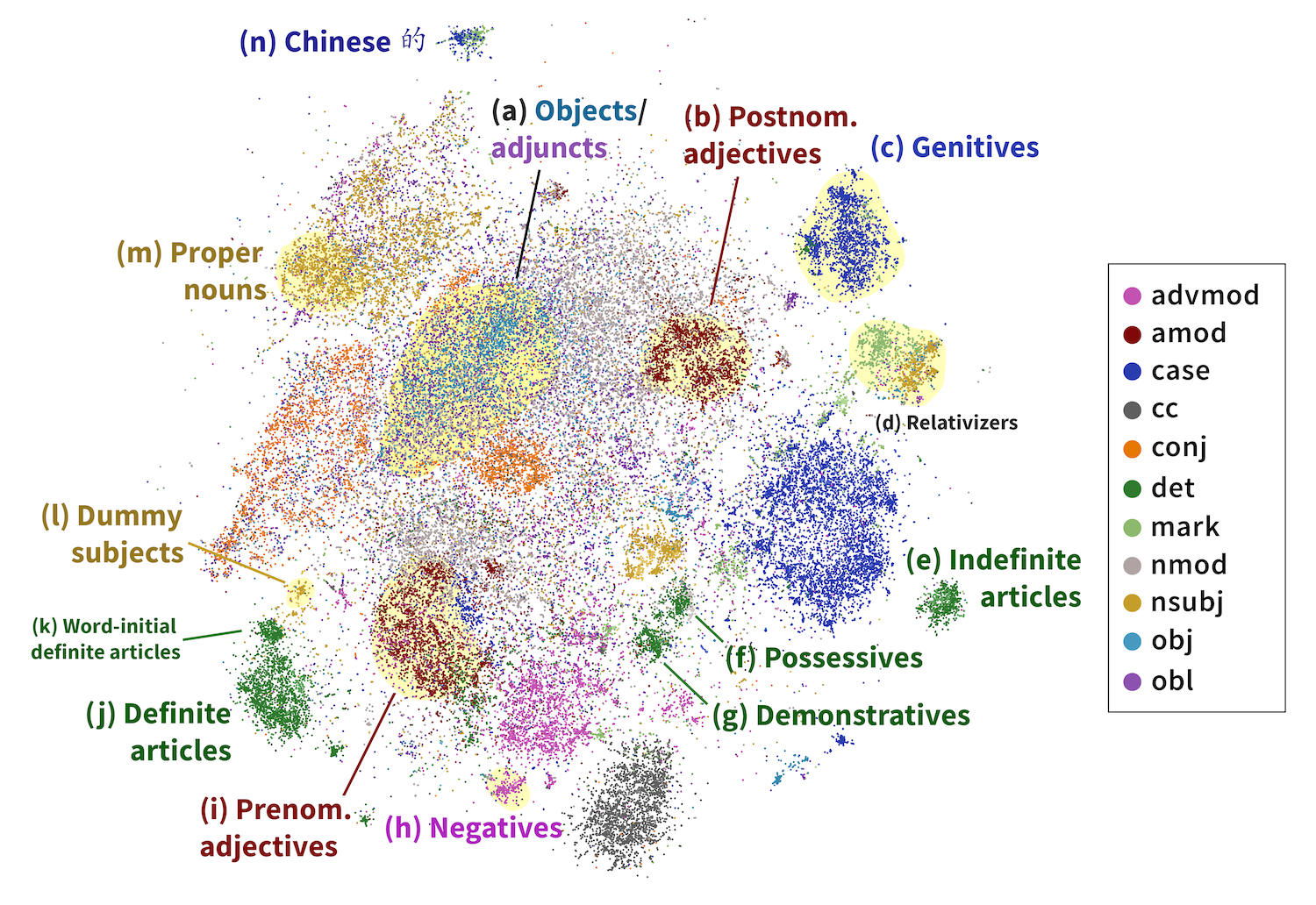 t-SNE visualization of 100,000 syntactic difference vectors projected into the cross-lingual syntactic subspace of Multilingual BERT. We exclude punct and visualize the top 11 dependencies remaining, which are collectively responsible for 79.36% of the dependencies in our dataset. Clusters of interest highlighted in yellow; linguistically interesting clusters labeled.

In this work, we’ve found that BERT shares some of the ways it represents syntax between its internal representations of different languages. We’ve provided evidence that mBERT learns natural syntactic categories that overlap cross-lingually. Interestingly, we also find evidence that these categories largely agree with traditional linguistic concepts of syntax.

Excitingly, our methods allow us to examine fine-grained syntactic categories native to mBERT. By removing assumptions on what the ontology of syntactic relations should look like, we discover that mBERT’s internal representations innately share significant overlap with linguists’ idea of what syntax looks like. However, there are also some interesting differences between the two, the nature of which is definitely worth further investigation!

If you’d like to run some tests or generate some visualizations of your own, please head on over to the multilingual-probing-visualization codebase!

Finally, I’m deeply grateful to John Hewitt and Chris Manning, as well as members of the Stanford NLP group for their advice, including but not limited to: Erik Jones, Sebastian Schuster, and Chris Donahue. Many thanks also to John Hewitt and Dylan Losey for reading over the draft of this blog post, and to Mohammad Rasooli for advice on Farsi labels in the original paper.